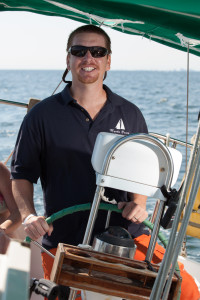 Sam has always loved the water, growing up in Kentucky along the Ohio River. At fourteen he attended camp where sailing was offered and completed his first sailing classes sailing dinghies and olympic style craft. Sam went on to study in Lexington, KY at the University of Kentucky and became interested in whitewater sports. He paddled whitewater around the globe with his principal achievement, co-leading the first successful expedition down the Yangtze River in China.

With a daughter in tow, Sam and his wife Karen decided to look into sailing as a family activity. They began with ASA instruction in Traverse City, MI with a local ASA facility there. Sam became active in a local Kentucky Sailing Club, Cave Run Sailing and while Commodore led the development of CRSA to develop their own school that continues to this day. During the early 2000’s Sam, Karen and Rachel sailed on chartered craft in the Caribbean, British Columbia, Brazil, Florida, Greece, Scotland, California, and Spain. During these events Sam would often take students for a genuine ASA 104 class where the students would do a bulk of the planning in addition to enjoying exotic destinations.

In 2016, Sam and Karen retired from corporate life to join a friend on the World ARC, a circumnavigation of the globe beginning and ending in St. Lucia. They completed that cruise in May of 2018. Upon returning to the US in 2018 they boarded their Sabre 402 “Muse 10” and began an extensive refit in Pensacola, Fl. They sailed the boat around Fl and found a new home in Hilton Head SC.

Sam loves sailing, the water and active sports. He feels like he’s been blessed and is excited to share his passion for sailing with those who are new to the sport and are eager to see what’s beyond the horizon.

Peter first developed a love for the water while boating and waterskiing with his family on the Potomac while growing up in Northern Virginia.

After college, Peter discovered his love for teaching and spent time teaching in the school system and teaching English as a Second Language abroad in Europe. Upon returning to the United States, Peter got involved with a sailing club at the University of Wisconsin and quickly grew passionate about the sport. From teaching on small dinghies and large keelboats to racing, running the ASA program, snow-kiting, and leading work-parties, Peter found a way to get involved in many aspects of the sport.

Marriage, family, and the Navy took Peter around this last decade to Japan, Rhode Island, and finally North Carolina. It was during this time that Peter continued to refine his teaching skills working part-time in community college and adult education settings while teaching ASA classes on weekends. North Carolina finally brought Peter to a warmer weather place, and so Peter decided to transition from sailing being more of a hobby job to a more full-time career.

With his Captain’s license in hand now, Peter now teaches ASA classes on a more regular basis and runs charters for other organizations. Peter loves sharing his knowledge and skills and having others experience the freedom and joy of sailing! Outside of work, Peter enjoys spending time with his family including his three little boys. Someday, he and his family hope to embark on some epic sailing adventures!